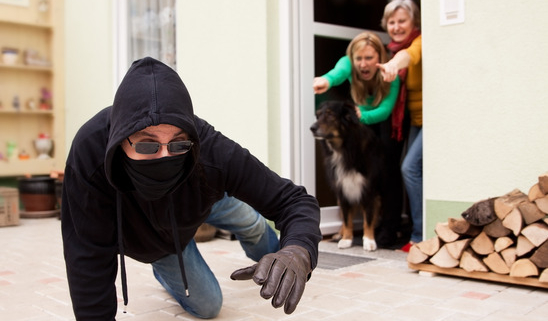 When you enter a property or business without permission that is not open to the public, you are considered to be breaking and entering or entering without breaking. In fact, if you enter any type of dwelling that is valued at $100 or more without obtaining permission first, you risk being charged for the crime, which is classified as a misdemeanor charge. The only time a person is not considered to be breaking and entering is when:

Now, the penalties increase in severity when you break into a hotel, office, store, shop, warehouse, barn, or other structure with the intent to commit a felony or a larceny. In this case, you said to be guilty of a felony crime which is punishable by imprisonment of up to 10 years. A felony, unlike a misdemeanor, generally means a person convicted of a crime at this degree is likely to spend a significant amount of time in jail. A misdemeanor charge means you may still serve a jail sentence, but it is usually for a year or less.

When does breaking and entering become a home invasion charge?

When a person makes the cognizant decision to break into someone’s home knowing they are not lawfully permitted to do so and has the intent to commit a felony, larceny, or assault in the dwelling, they would be guilty of home invasion in the first degree if at any time while the person is entering, present in, or exiting the dwelling either of the following circumstances exists:

When convicted of home invasion in the first degree, you are facing up to 20 years in prison along with a fine of no more than $5,000, or both, according to the State of Michigan Legislative Council.

When a person is charged with breaking and entering or even home invasion in the state of Michigan, it is best they retain a Lansing, MI criminal defense lawyer as soon as possible. Home invasion charges aren’t taken lightly and you can expect that the prosecutor on the case will push for you to serve the maximum penalties for the crime. So, if you want to stand a chance at getting your charges reduced to a charge that would reduce your penalties, you will need to hire a defense attorney who can protect your interests. At the Law Offices of Stuart R. Shafer, P.C. we are committed to our clients and helping them obtain a favorable outcome in their case.

If you are facing a criminal charge in Lansing, East Lansing, DeWitt, Okemos, St. Johns, Grand Ledge, or Charlotte and would like to schedule a consultation to discuss your case in depth, call us now at 517-487-6603 so we can set up a time to meet.

You can reach the Law Offices Stuart R. Shafer, P.C. at:

What are Michigan’s Laws Concerning Possession of Marijuana?

Have You Had Your Property Seized by Police Without Being Charged or Convicted...
Scroll to top